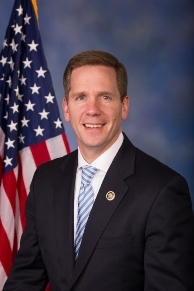 U.S. Rep. Bob Dold (R-Dist. 10) visited Holmes Middle School in Wheeling on Monday to promote an amendment he authored that would prevent the state from using federal education funds intended for aiding in-need students to pay down unrelated past pension obligations.

The State of Illinois taxes school districts to pay the district’s pension obligation for teachers using Title I funds, as well as past pension obligations due to underfunding. The state collects $74.5 million per year through this practice and uses approximately $59 million to pay down old pension debt. rather than paying education-related expenses for low-income students and schools, Dold said.

“We shouldn't be using federal education dollars intended to help our most in-need students to bail out state legislators who can’t agree on a fiscally responsible budget,” Dold said. “This proposal ensures that we are giving our most vulnerable children the best chance to succeed and would have saved Wheeling District 21 more than $100,000 last year. This would have allowed the district to hire more teachers to support under-served students.”

Dold's amendment would put that $59 million each year back into programs and services that help low-income students. It was included in the version of the Student Success Act the U.S. House advanced in July, but was left out of the Senate's version of the bill. Dold came to Wheeling to galvanize support for reviving the measure when the two versions of the bill are reconciled. He was joined by school administrators, school board members, and members of the advocacy group Stand for Children Illinois.

“Poor schools should not be the piggy bank that the state breaks open to pay off its massive pension debt," Stand for Children Illinois Executive Director Mimi Rodman said. "Districts should be making their spending decisions in the best interests of students, not sacrificing a third of their federal funds that are intended to help our most underserved children. In a state already notorious for school funding disparities, our neediest schools can’t afford this additional hit."

The Student Success Act is currently under consideration by the House's Education and Workforce Committee and the Senate's Committee on Health, Education, Labor and Pensions.