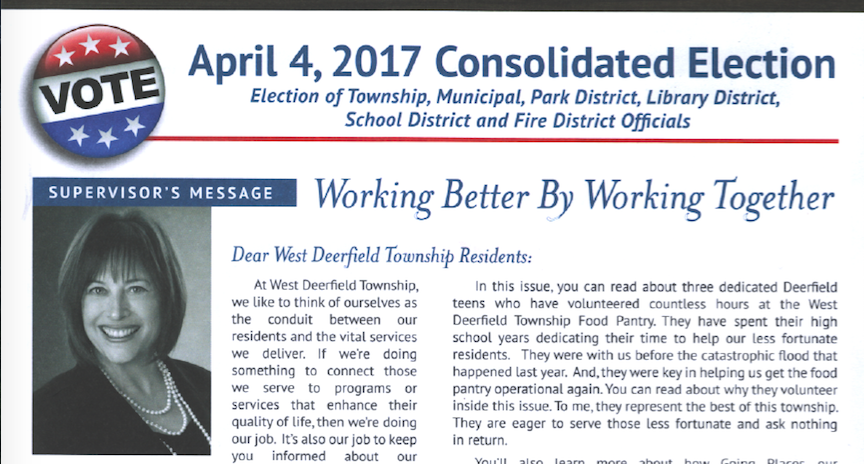 The Illinois State Board of Elections is reviewing a West Deerfield Township flier sent to residents after a complaint that the mailer was more of a political promotion than an informational notice.

Doug Bennett, a West Deerfield resident, filed the complaint with the Illinois State Board of Elections because he felt the flier was misleading, he told the Lake County Gazette.

“[The] newsletter looks like an election piece on behalf of the incumbents running in the upcoming election,” Bennett said. “I filed a complaint with the state board of elections about public funds being used to promote a candidate or slate.”

Bennett said a closed hearing was held on Wednesday regarding the complaint and that an investigation is ongoing.

“It was filed and the preliminary hearing was held,” Mark Shaw, an attorney representing Bennett, said.

Shaw said the preliminary hearing was with an officer who would make recommendations to the board of elections for a final decision.

Bennett said a decision will be reached in the coming days or weeks.

The West Deerfield Republicans characterized the mailer as disheartening.

“The newsletter appears more like a campaign piece for Supervisor Alyson Feiger and Clerk Kristen Scott – complete with vote logos accompanying their articles and photos – than a piece informing residents of the services provided by the township,” the group said. “We believe that this mailing was either deliberately timed to increase voter awareness of the incumbent candidates or reflects a stunning lack of judgment on the part of Supervisor Feiger.”

The Republican slate also said taxpayers should be reimbursed for the cost of the mailer.

“Cheap, Chicago-Style political games like these have no place in Lake County, where honesty and integrity are still cherished by voters,” Stone said. “My opponent may bow at the altar of Mike Madigan and the Democratic machine, but I will not stand idly by while she uses taxpayer funds to turn out votes for her campaign.”

Gordon said that the mailer was a gross misuse of taxpayer dollars, and that spending under a Republican administration would be more responsible.

“These funds will be channeled into expanding services for seniors, addressing food insecurity and lowering the tax levy for everyone in West Deerfield Township,” Gordon said. “Supervisor Feiger and the board of trustees are simply out of touch by taking more from taxpayers who are already being forced to work with less.”