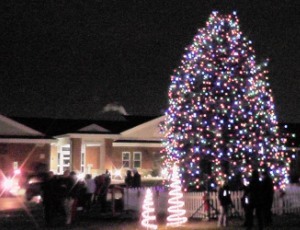 The announcement of the holiday decorating contest winners added a little spark to the Round Lake Beach Village Board meeting 7:00 p.m. Jan. 11 at Village Hall, 1937 North Municipal Way.

After the Pledge, the board approved the agenda and proceeded to approve minutes from the Public Hearing meeting of Dec. 14, 2015, as presented as well as approve expenditures in the amount of $1,266,812.93.

In standing committee reports, Trustee Mount reminded the board of SWALCO’s electronic collections procedures that will continue through May 2016, with five local drop-off points and the capability of disposing of household chemical waste by appointment.

Mayor Hill’s announcement of holiday home decorating winners revealed that the grand prize was awarded to residents at 2395 Tedy, the Sparky Award went to 122 Beachview and a Lifetime prize went to 1328 Hainesville Road.

First prize was awarded to 173 Lindsay, second prize went to 1330 Williams and third prize went to 607 Heather, with an honorable mention going to 179 Lindsay.

In new business, the board approved a resolution with Robert W. Baird & Co. Inc. and an ordinance providing for the issuance of Series 2016 General Obligation Bonds, not to exceed $7,900,000.

Want to get notified whenever we write about The Office of the Village of Round Lake Beach Board Members ?

Sign-up Next time we write about The Office of the Village of Round Lake Beach Board Members, we'll email you a link to the story. You may edit your settings or unsubscribe at any time.

The Office of the Village of Round Lake Beach Board Members