Libertyville board honors Boy Scout, ensures dogs get their days 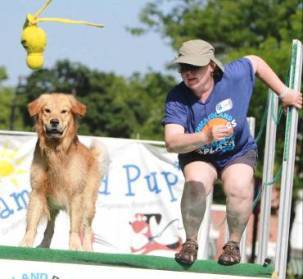 Matthew Pavlik, a very special guest in the audience, was acknowledged for his Boy Scout activities as he was introduced and honored at a recent Libertyville Board of Trustees meeting.

When President Terry Weppler called on Matthew to describe his latest undertakings, the Boy Scout said he was working on his citizenship and community badges.

From surplus property and raffle licenses to school building alterations and infrastructure projects, the board took action on a variety of current zoning issues, tax matters and special-event contractor agreements during the meeting.

The board approved a request for the use of village properties in anticipation of the 2016 Libertyville Days Festival scheduled for June 16-19, with input from the police and fire chiefs.

“Dog Days of Summer,” set for July, was also granted the go-ahead. The annual dog-friendly event created by businessman and former owner of Pampered Pup’z Bill Kaiser has generated much positive publicity for Libertyville in the past. Because Kaiser seeks to have the event come under the village’s auspices in the future, the Parks and Recreation Committee recommended that the village enter an independent contractor/consultant agreement with him.

Trustees also examined and authorized a roadway project involving portions of Fourth Avenue, Red Top Drive and Greentree Parkway which will be 80 percent supported by federal funding through the Illinois Department of Transportation.